Conference of the Catalan Telecentre Network

As I am located in Barcelona and an enthusiast 'co-worker' at the headquarters of Xarxa Punt TIC (the Catalan Network of ICT "points" or training centres), I was invited at the Social Internet Conference that took place at Barcelona's Cibernàrium last November 30th. 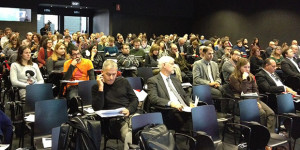 More than 150 ICT training centre managers & facilitators attended this annual network meeting, and among the speakers were representatives of Telecentre-Europe, Telecentre.org Foundation and the Community Association of Spanish Telecentre Networks.

The conference was organized by the Knowledge Society Agency of the Government of Catalonia (owner of the ICT Points Network) and showcased the spirit, people, projects and objectives of a network with more than 600 training centres, this year celebrating its 10th anniversary.

Because 93% of the Catalan population owns a mobile phone and 56% accesses the internet through its smart phone, the Catalan Network of ICT points created a mobile app that enables their users to locate their closest training centre. The app also shows how to reach the centre on foot, by public transport or by car.

Another Catalan project that amazed me was the workshop on educational robotics. It was organized by TEB Youth Association for its 20th anniversary event, last October 27th. The workshop's coordinator, Núria Alonso, explained: "Programming is what robotics is all about. By showing a very practical and entertaining example of programming, we try to motivate people to take up studies in informatics. Because ICT is the only sector in Europe today with a high demand to fill job vacancies". 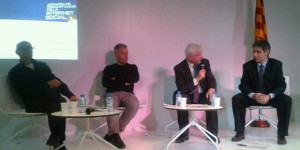 "The ICT sector is indeed a key employment sector and already represents more than 40% of the economic growth in Europe" said Santiago Bellido from the Knowledge Society Agency.

An analysis of Spain's main job site Infojobs shows that technical ICT profiles like programmers, software developers, IT managers, IT consultants and system analysts are still very much demanded on the Spanish labour market: "Most of the companies don't ask for a university degree to fill those vacancies, especially for profiles like system & network administrators, IT maintenance experts or user assistants" Santiago Bellido continued. 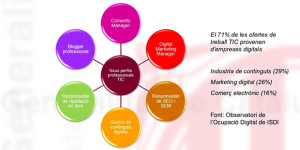 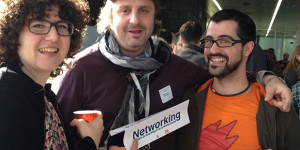 Research on this has been done by ISDI, a Spanish Internet Business school. Their job vacancy database reveals that during the last 3 years, 71% of all ICT related vacancies proceeded from companies founded in the new digital sector:

"29% of the vacancies are coming from the digital content sector (video games, digital entertainment and mobile content), 26% from the digital marketing sector (agencies & consultants in e-marketing and online strategies) and 16% from e-commerce companies with no off-line existence (mostly related to real estate, tourism & fashion). The remaining 29% of the vacancies are from traditional sector companies that are initiating or reinforcing their internet presence. Of all vacancies, 50% are from multinational companies with a national branch in Spain." 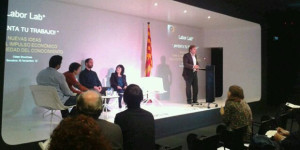 A lot of Catalan ICT points have incorporated the idea of social innovation into their objectives & projects:

The conference wasn't limited to the Catalan territory. Also Juan Francisco Delgado from the Community Association of Spanish Telecentre Networks (CATN) and Gabriel Rissola from Telecentre-Europe (TE) were invited as speakers and Miguel Raimilla from the global Telecentre.org Foundation (TCF) participated through a video interview that was recorded some days before in Barcelona. 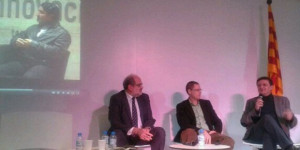 Juan Francisco Delgado gave an overview of successful social innovation projects in the south of Spain and the tweeting audience proposed to organize an exchange project between ICT point facilitators of the different Spanish regions. Esplai Foundation accepted the proposal and will organize a first event at its facilities in Barcelona.

The event was closed by Ricard Faura i Homedes, director of the Knowledge Society Agency of the Government of Catalonia and organizer of the conference.